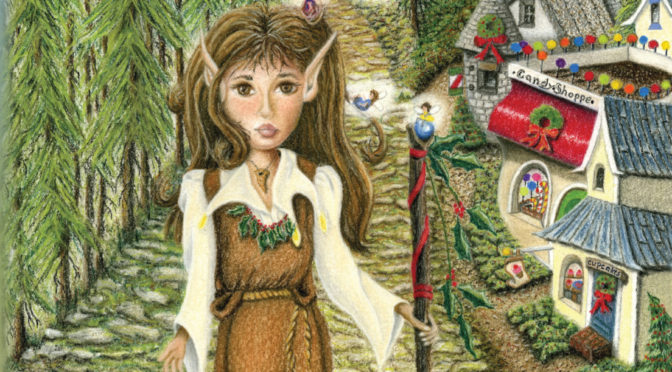 Book One of the Chronicles of Saint Nikolaus entitled Rowan and the Dreadful Kidnapping is written for middle grade readers, ages 9-14. It is an epic fantasy that turns one of the world’s most beloved stories into an adventure of a lifetime!

Suspended high above the North Pole, the ancient Village of the Saints is on the verge of hysteria. Saint Nikolaus’s nine reindeer have been kidnapped. The prime suspect? Rowan, a small wood elf who only recently arrived in the Village.

Determined to clear her name and find the kidnapped reindeer, Rowan must do so before Christmas Eve or Saint Nikolaus will be forced to cancel his customary trip around the globe.

As she embarks on her perilous journey, Rowan stumbles across a mortal boy and his polar bear who join the adventure. Together, they start on a quest that brings them face to face with evil itself. Goblins, witches, ghosts, and vampires are only the beginning for Rowan and her companions.

Readers will get lost in a world where willipods lend as much mischief as help, polar bears play tricks on goblins, monsters transform into elves, constellations walk and talk, dwarves dwell in ice grottos…and reindeer fly!

Each book of the series is a complete story in itself. Book Two of Chronicles is currently in the writing process. Like Book One, it will feature Rowan and her magical flying reindeer, Rudy, along with the formidable Godmother, Lady Fata. Colorful MerPeople figure prominently in Book as well as Saint Nikolaus! Look for Book Two on this website.

Welcome to the World of Nikki Simpson, author of fiction/nonfiction books for children and adults.